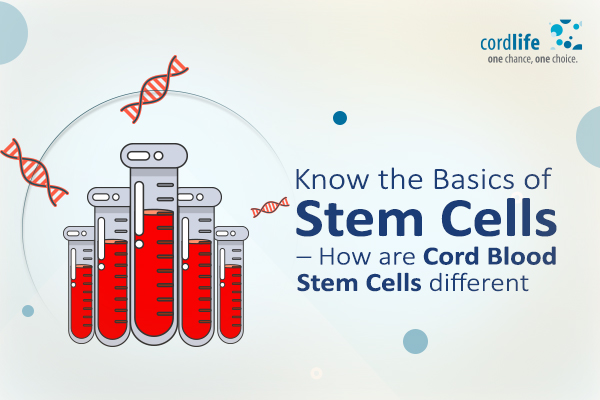 Over the years, stem cell transplantation has been considered promising in treating problems related to several life-threatening diseases and disorders. Diseases like cancer, Parkinson’s and other blood and genetic disorders and immunological deficiencies have seen some hope since the advent of stem cell therapy.

But, do you know what exactly are these stem cells and where do they come from?

Umbilical cord blood stem therapy, has also emerged as a contender against the other stem cell treatments in treating lethal diseases.

But, how are umbilical cord blood stem cells different?

To find out the answers to all your questions… Go through this article.

What Are Stem Cells?

Stem cells are the roots or the master or the mother cells in the body. They are unique because they perform the two key functions of pluripotency and self-renewal in the human body.

As far as the pluripotency of the stem cells are concerned, the stem cells divide into several daughter cells and go into the “differentiation” process, thus giving rise to various organs in the body like heart, brain, eyes, liver, etc. Additionally, they have this unique potential to regenerate and repair the diseased or damaged tissues in the body.

Everything doesn’t end there.

Researchers continue to go deeper looking for some more knowledge on stem cells banking. In fact, their studies have indicated several sources of stem cells.

So, What Are the Sources of Stem Cells?

So, the stem cells, which are the earliest types of cells in the cell lineage is being derived from:

Basically, three days after the fertilisation, a normally developing embryo will have 6 to 10 cells. But, by the fifth or sixth day, when the egg gets fertilised, it known as blastocyst. Blastocyst is an entire ball of inner stem cells, which eventually takes the shape of an embryo. The other group of cells, however, is active in protecting and nourishing the inner cells.

These stem cells, also known as niches, are found in the adipose tissues, bone marrow, peripheral blood and the umbilical cord blood. Unlike embryonic stem cells, these are a few undifferentiated stem cells. In this type of cellular differentiation, the stem cell either differentiates into a few cell types or only one cell type.  For instance, while haemopoietic stem cells (HSC) can divide into blood cells only, there are neural cells, which form cells only in the nervous system. Several bone or blood cancer has been successfully treated through bone marrow transplantation. In fact, till date bone marrow transplantation has been considered as a preferential treatment option for a very long time. But, due to the limited lifespan of the bone marrow stem cells (the phenomenon whereby normal non-malignant cells stop dividing in vitro, after approximately fifty divisions, which has been termed the Hayflick limit), painfully invasive procedure and with a serious complication after the transplant, the effectiveness and safety of it’s is still being tested.

Going by the basics, during pregnancy, the umbilical cord acts as a “String of Life” between the mother and the baby. However, earlier when babies were delivered, it was prevalent to treat the umbilical cord (with the cord blood) as a medical waste. However, with the advent of cord blood stem cell therapy and regenerative medicine, the whole scenario has changed.

Research has it that, cord blood is largely driven by haematopoietic stem cells, which can be used to regenerate the immune system. Their regenerative powers can also come in handy when treating life-threatening diseases. After conducting intensive research, it has been concluded that they can be used to successfully treat leukaemia and other blood disorders, as Hematopoietic Stem Cells (HSCs), can transform into various blood cell types. In fact, due to its younger, purer, more adaptable and active nature, risks and complications of graft-versus-host diseases is not observed after the transplantation. Rather, it becomes easy to find a match, especially within family and siblings.

Through new-born cord blood banking, the cord blood stem cells can be preserved after a painless collection, for 21 to 75 years of a baby’s life so that, it can be used for medical use, even after two decades.

Unlike embryonic stem cells, umbilical cord blood stem cells may not be pluripotent, but it, along with Wharton’s jelly and cord lining are being studied in vitro for neurological defects, immune deficiency and other organ disorders.

Umbilical cord blood banking would surely allow parents to gain access to cutting-edge treatments for themselves and their family’s healthy future.