Breathing problems in babies are more common than we imagine. Most babies suffer from temporary respiratory illnesses caused by varied factors during the first two years. However, some babies have more complex breathing disorders that are either congenital or environmental.

No child has not suffered from the common cold. The common symptoms of common cold include blocked nose, sore throat, runny nose, and breathing distress. Common cold can be treated with home remedies and usually goes away on its own in a few days.

Flu symptoms are similar to the common cold and are transmitted through a cough or sneeze droplets from one person to the other. Flu doesn’t cause much damage to healthy people. However, if the baby develops severe breathing distress it is better to visit the hospital. The best way to prevent flu is by taking flu vaccines.

Babies who are prone to allergies are at high risk of asthma. This is a chronic condition that affects the lungs. Asthma can cause severe breathing distress, coughing, wheezing, and tightness of the chest. Asthma can be a long-lasting disease. However, there are ways to control asthma attacks. Many kids outgrow asthma during their teenage years.

Respiratory distress is a symptom of pneumonia. In this, the bacteria Streptococcus pneumoniae (pneumococcus) infects the lung airways and causes inflammation. It also causes fluid accumulation in the lungs thus, blocking the airways. If not treated properly, pneumonia can be fatal in babies. Broad-spectrum antibiotics are used to treat pneumonia. Children are often put under oxygen support to reduce breathing distress.

This is caused by the respiratory syncytial virus (RSV). It is believed that 90% of children get affected by RSV in the first two years of their lives. Severe wheezing, runny nose, rapid breathing, coughing, and high fever are the major symptoms of this disease. The coughing and wheezing last for more than two weeks. Children can also develop ear infections due to bronchiolitis.

What To Do When the Baby is Suffering Breathing Problems?

Immediately visit the doctor if one of the symptoms appears.

Your pregnancy requirements would be slightly different from the other expectant moms. You may have a balanced diet, stay hydrated, and be active to meet your needs. Who knows getting a massage during pregnancy may be relieving for you– both physically and mentally. Now, all that you need to do is consult your healthcare provider […]

Why Is Ginger Considered a New-mom’s Best Friend?

Ginger, with its medicinal properties, is known to aid indigestion and saliva flow, therefore keeping the morning sickness and vomiting absolutely under control, during the first trimester of a pregnant mother. But, once the baby pops out, and a new mom undergoes several changes – both physically and emotionally, she very often wants to know, […] 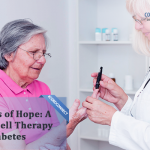 Stories of Hope: A Stem Cell Therapy For Diabetes

Maria Torres, a healthy, fit woman of 43 was diagnosed with Type 2 Diabetes. It was totally out of the blue. She was a woman who took her health and fitness seriously with regular exercise, healthy eating and weight management. She just couldn’t believe it. Refusing to accept the reports, she requested her doctor to […]